Depth of Field: There will be math.


Most of us learned that one increases depth of field in a photograph by stopping down, which is the same thing as increasing the aperture of a lens. (This is one, but not the only bit of confusing terminology in photography.) That's the simple part. Actual depth of field is a function of the focal length of a lens and the lens diameter.

Focal length? Focal length is all about converging light on the plane of "film," or usually sensor. To simplify, focal length is the distance from the optical center of the lens to the point on the sensor where that light converges. If one thinks of the light from a given scene shaping into a pyramid as it converges in the aperture of the lens, and then is projected onto a sensor, it's not too hard to visualize that a long lens will narrow the field of view (the amount seen of the scene). Long focal length = narrow field of view.
For example, a 500mm lens will have a field of view that is tiny compared to a 20mm lens. That's why the 20mm is called a "wide angle lens." That angle is the field of view.

Lens diameter above really refers to the diameter of the "pupil" through which light passes. F8 in a 25mm lens produces a pupil that is much smaller than that produced by a 500mm lens at f8. The trick is that both of the f8 settings will result in the same light on the sensor. That's because in the long lens  that light travels far longer than in the short lens, and with that travel, the light's intensity decreases (actually, it decreases by the square of the distance). The light is the same as far as the sensor is concerned. The fields of view are much different.

So, from a practical standpoint, if I want the greatest depth of field, I use the widest angle lens available, and I focus on something that is not close to me. OK, that sounds simple enough, but it is not quite that simple. How could anything that involves a circle of confusion be simple?
Older lenses came with depth of field scales on their barrels, but this isn't the case with newer lenses made for digital cameras. Many DOF charts are available online, as are calculators, but the easiest approach may be to download an app that is a DOF calculator (simpleDOF is even free). 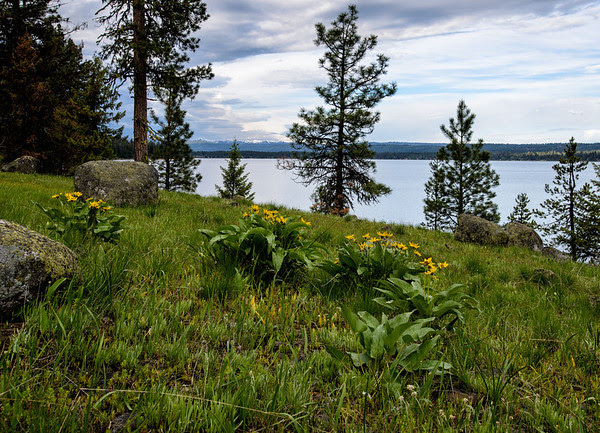 Here, the focal length was 25, f16, focus was on the leaves in the middle bunch of flowers. When examined at the pixel level, the rock in the foreground is tack sharp, as are the mountains in the background.

There is one more thing. Diffraction. Too much effort towards maximum depth of field, can lead to blurry images. This will be discussed as it's own topic in the near future. Nikon discusses it here for the new D800: http://www.nikonusa.com/en_US/o/Y6wrkA9OU_z04IreazIXl_22UII/PDF/D800_TechnicalGuide_En.pdf


No question the files from the D800 are great at low ISO's, but I haven't had too much chance to explore just high far I can go with pushing the low light limits. Photographing in overcast conditions with Auto ISO and a teleconverter, the lens combination was stopped down to 6.3. My shutter speed of 1000 resulted in an ISO of 2800. I have certainly produced good files on the D700 to ISO of 2000, and at times to 3200, but this camera with its increased pixel density?
Here is a major crop of a photo of a western tanager male done at those settings: 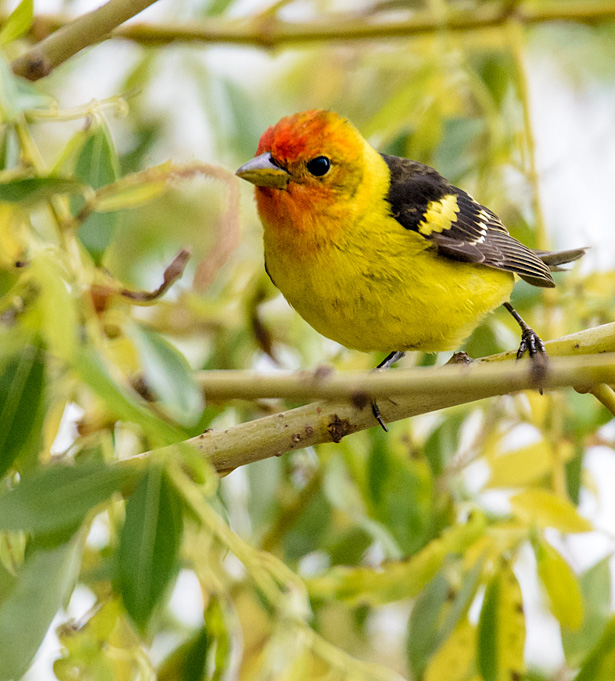 I did a a little noise reduction only in Lightroom 4 (using Luminance=18, detail=94, contrast=60, and leaving the color noise reduction at default). I don't yet know what the limit is. I don't think I'll have that until I have more full-frame shots at high ISO, but right now, I'm thinking I can be close to matching the D700 high ISO performance, and that is far better than I would have thought.
Posted by Sarah at 10:33 AM No comments:


Overcast or rainy days are my favorite for photography, giving the most freedom of time. One can be on the edge of the ever-changing light for hours at a time. The harsh sunlight is not a concern.
Yesterday seemed to offer promise, and I had been anxious to photograph the canola fields in full bloom. So, off I drove into the rainy morning, following a lead from my friends who had reported good fields near Grangeville. 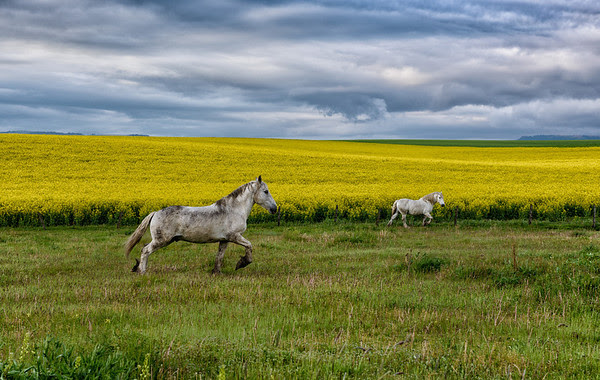 No one was around, this being Tuesday following the Memorial Day weekend, and the countryside was showing spring in greens and yellows and emerging blue lupines. Perfect day for photography. 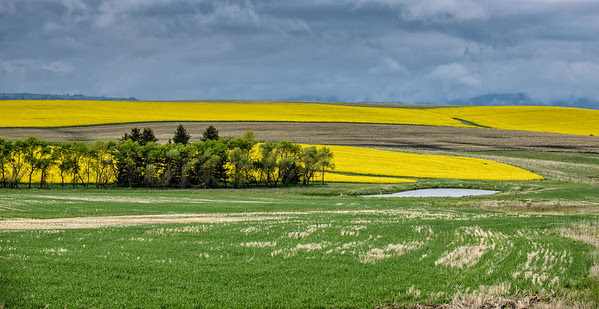 Later, I checked out a place I'd heard of but never visited, Tolo Lake, a small obscure spot that several species of birds seemed to love. I was delighted to find Eared Grebes happily feeding there.

I received a new Nikon D800 from Levines (http://www.eplevine.com/, but don't rely on their website. Call them. They're great.) at the end of April. Since that time, I've mostly resisted the paranoia that is associated in the forums at the release of most new high-end equipment. I've just used the camera.
The decision was a bit of  a struggle in itself, as I was torn between the D4 and its 10 fps and amazing low-light capabilities and hoping for a camera that would actually fit in my small hands. As a wildlife photographer, it's not like I don't have enough to carry with a 500mm lens, teleconverters, and associated gear. The other concern was a seemingly in-bred belief that a camera with that many megapixels could not possibly have good low light capabilities. The edges of the day always seem to present the best photographic possibilites, a fact so well illustrated when I spent a blissful morning in the pouring rain at Damon Point in Ocean Shores, WA photographing snowy owls : 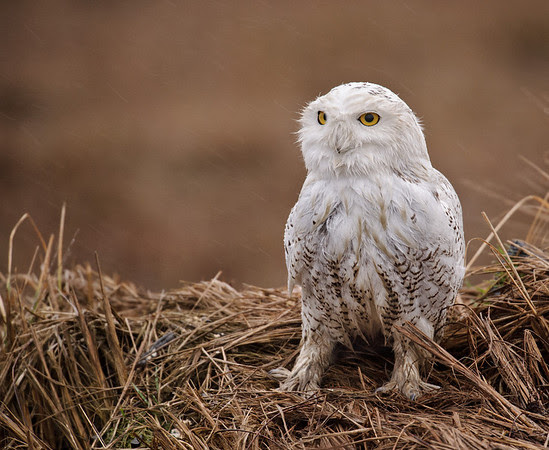 
At the same time, as Nikon was not providing an 800mm lens that I'd been admiring on the Canon front for the past few years. So, I had the choice of a camera with decent cropping possibilities or totally switching systems, a seemingly daunting task. Enter the D800.
At this point, with about a month of use, I can say that I am quite happy with the D800. I haven't pushed it's low light abilities to any limit. Previously, I used my D300 whenever possible for birds, because of the smaller field of view, but I was never really happy with anything beyond an ISO of 800, and that was stretching it. Now, with the D800, I have fine examples of images at 1600, and I will test its ability to go higher.
For the first time since I've owned the Nikon 1.7 teleconverter, I have decent images made with it and the 500mm lens.Overall, the speed of focus is perhaps my favorite feature. The file size and phenomenal amount of cropping possible while still leaving a reasonably sized image has to be number 2.
It's hard to separate the detail preserved in the D800 images from the improved detail that one can get from Lightroom 4, as I added LR just a bit before the camera, but the combination is impressive. I've experimented a bit with Nikon NX again for processing, and I can't really see a difference in the finished product of NX vs LR. As LR is at this point easier for me to use and integrated with Photoshop, I doubt I'll be using NX much. 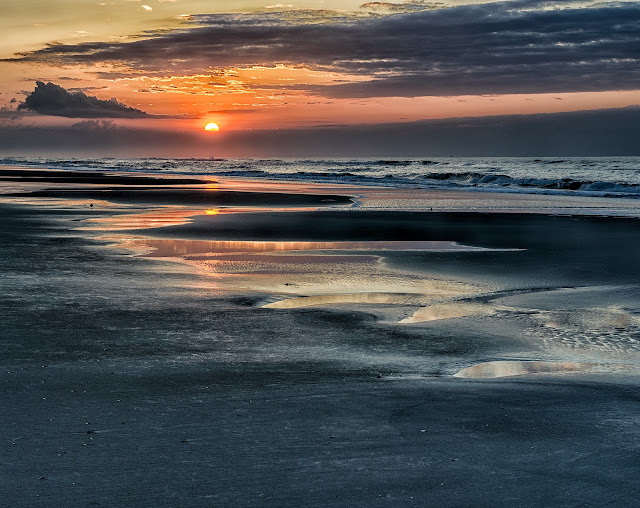